Is the Bible accurate? 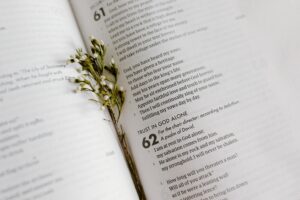 Supposedly no original manuscripts remain. Instead, we have copies of manuscripts. Note – this could actually make the Bible more accurate.

How do copies of manuscripts make the Bible more accurate? Wouldn’t that allow for more room for error? No.

Let’s give a simple example of four copies of manuscripts:

One manuscript says the following: *ogs

The second says the following: D*gs

The third says the following: Do*s

The fourth says the following: Dog*

What can we conclude? The original said: Dogs

However, if only the original manuscript was used and it said, for example, D**s. Maybe, it is the word duds or dots. Moreover, someone could just add a bunch of extra details, omit sentences, re-write sections, etc., and we wouldn’t be able to cross-check that with other manuscripts to verify its validity.

Does the Bible contradict itself? While it may seem to at times, the answer is, no.

The 66 Books of the Bible, the Old Testament having 39 and the New Testament having 27, are argued by some to be totally impeccable with no errors. After learning about some verses, it appears that there may be some contradictions upon closer inspection. However, it is important to note that the Bible does not have any contradictions.

Did the Holy Spirit really empower the writers to write exactly what God wanted them to if there seems to be obvious contradictions? Yes, I just believe that some don’t understand the verses, within context, well enough and some verses appear to contradict one another when, in fact, they don’t.

When tempted, no one should say, God is tempting me. For God cannot be tempted by evil, nor does he tempt anyone; but each person is tempted when they are dragged away by their own evil desire and enticed. Then, after desire has conceived, it gives birth to sin; and sin, when it is full-grown, gives birth to death. (New International Version)

Because as far as I know, Jesus was tempted at least three times in the wilderness. If so, how can this statement be true?

Does God in this case refer to God the Father in Heaven and not Jesus Christ in flesh? It seems to be explicitly referring to God in Heaven. Jesus is God as well, but He is God in flesh not God in Heaven.

Also, there appear to be others as well: https://thafcc.wordpress.com/2015/07/14/10-pairs-of-bible-verses-that-seem-to-totally-contradict-each-other/ (TheFCC).

However, like the uniqueness in a “shades of grey” color gradient, if it seems to contradict itself, it doesn’t according to some scholars and theologians.

While I still believe that Jesus Christ is the one and only God (Explanation here: https://jesuschrististheking.com/why-god-why-christianity/), I have wondered if the Bible is entirely accurate or if sinful humans ended up distorting the message (the “66” Books of the Bible) just as there are many different versions of the Bible and other religions; I’m thinking the former primarily based upon the number of manuscripts and that it is the Word of God.

To further elaborate on this, I will use the following example: what if the copies are accurate but the original information written was skewed or made-up when the authors wrote it? In other words, what if we have accurate manuscripts of falsified, original information? This is where things such as eyewitness testimony among more than one person, archeological evidence to support such claims, etc., reinforces the original content. When tons of people say the same thing, it likely happened. With that being said, some of the things written in the Bible could end up convincing people that the Bible isn’t the truth if they aren’t looking at it correctly along with other pieces of evidence. Just like many things, it’s important not to jump to conclusions when you are uncertain.

TheFCC. “10 PAIRS OF BIBLE VERSES THAT SEEM TO TOTALLY CONTRADICT EACH OTHER.” The Fat Cat Collective, 14 July 2015, https://thafcc.wordpress.com/2015/07/14/10-pairs-of-bible-verses-that-seem-to-totally-contradict-each-other/.